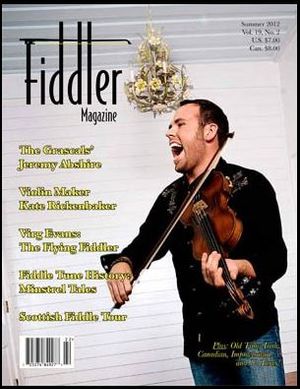 ...burst onto the bluegrass scene as a member of Billie Renee and Cumberland Gap (winners of the 2006 SPBGMA International Bluegrass Band Championship). He has played and toured with multi-award winners Dale Ann Bradley and The Grascals. His style is both fluid and hard driving, owing to the influences of Benny Martin, Scotty Stoneman, Chubby Wise, Bobby Hicks, Kenny Baker, and Stuart Duncan – whom Abshire cites as his favorite fiddle player.

Easy going yet focused, Abshire has entertained bluegrass audiences around the world, reaching legions of music fans, many of whom had never before heard the energetic rhythms, “high lonesome” vocals and blinding instrumental virtuosity of the genre.

Born and raised on the fringe of the “bluegrass belt” in northeast Ohio, Jeremy began playing before he was 10, thanks to the gift of a fiddle from his grandfather, who took him to jam sessions and then to classical lessons. “I was a little lucky in that,” he recalls with a smile, “because while I practiced scales and played Telemann, my teacher was kind of unusual. He would tell me, ‘if you make a mistake, don’t ever stop. Throw in there whatever fits and keep going, keep moving forward.’”

The lesson served Abshire well as he moved further into the world of bluegrass, where music is learned by ear and improvisation is key, and in fiddle contests, too. But though he took home trophies in the latter, the goal of playing in a band remained foremost, and Abshire followed the traditional route of apprenticing in a succession of groups, rising through the ranks as he learned the ins and outs of the tradition-heavy style and the licks of its earlier stars.

Jeremy leapt into the front ranks of bluegrass in early 2007, when he joined a group fronted by Kentucky songstress Dale Ann Bradley, a veteran with broad-ranging musical tastes who would win the first of three consecutive International Bluegrass Music Association Female Vocalist awards later that year.  “That was a huge step,” he notes.  “I had always been a big fan of Dale Ann’s, so I already knew the songs she’d recorded and the fiddle parts. Because her style covers a lot of ground, I learned a lot more about music playing with her.”

Working with Bradley put Abshire not only in front of a national audience but the top ranks of other bluegrass artists, too, and it was only a matter of time before he was drawn onto even higher ground.

Abshire was tapped in 2008 to join bluegrass superstars, The Grascals, when founding band member Jimmy Mattingly decided to resume full-time work with one-time employer (and Grascals’ fan) Dolly Parton. The  group — already owners of four IBMA awards, including two top Entertainer of the Year trophies — turned to Jeremy, hiring him on the cusp of releasing their third CD, the critically acclaimed Keep On Walkin’.

Jeremy found himself increasingly in demand as an individual accompanist. Charlie Daniels recruited him to back Dan Tyminski on a glowing version of “The Christmas Song.” Movie star and guitarist, Steven Seagal brought him onboard for an album by the Hollywood star.

The demand for the Abshire touch is rooted in the approach to his job—which, while it allows plenty of room for soloing, is frequently focused on backing singers. “To play backup requires listening. It’s like singing a lonesome ballad. You have to feel it, break it down; listen to the words and feel the meaning. You have to understand where the pauses and breaths are, so that you’re not stepping on the vocal.’

Abshire has the gift to exercise restraint, saving the flashy licks for appropriate moments. He has earned a reputation for his always –tasteful playing, never overplaying and for respecting the place of the fiddle behind a singer.

“The fiddle is an extension of the vocal, so I try to put my voice into it, and just be as melodic as possible. I’ve been fortunate to play with singers I admire and appreciate, singers who have made it easy for me to feel the emotion of the song. When you feel it, it’s easy to complement instrumentally.”